Owning a BMW feels incredible, since BMW is one of the most spectacular automotive manufacturers in the world. BMW models have a solid reputation in the automotive industry due to their dependability and durability. However, some BMW models might have alternator seal problems over time, resulting in oil leaks. Leaking of oil from alternator seals is prevalent among BMW owners, but you don’t have to be worried because there is a simple repair.

Since all machines are prone to failure, the alternator seal is no exception. It is better to detect problems with the seal and the car as a whole early so that you can assure your safety while avoiding far greater and more expensive problems. This article will explain what alternator seals are and how to identify leaks from one.

An alternator is a component in your vehicle that generates electricity for the battery. A bracket, which prevents the alternator from sliding around, is held in place by your BMW’s alternator seal. If the seal breaks, it might result in a variety of issues.

The alternator seal in some BMW models usually has problems. The alternator is sealed by a gasket and a seal, this combo is prone to failure. The seals can dry out any time and crack, and once this happens there would be an oil leak.

The Signs of a Leaky Alternator Seal

When a seal begins to leak, you may notice a number of unusual symptoms. Keep an eye out for these signs:

Changing an alternator seal may appear to be a do-it-yourself project, but it is not. We do not suggest that you attempt to undertake this task on your own. Before you can get to the seal, you must first remove a number of components. An expert BMW mechanic will replace the seal in a day.

Allow the specialists at Hagan’s Motor Pool to assist you. Do not waste your money by taking your BMW to a dealer when the solution is right here! We can change your alternator seal at an affordable cost. Our shop is fully equipped with factory-graded and up-to-date diagnostic tools. If you allow a substandard shop to do the replacement, there is a good chance that it would not be fixed correctly. We will solve the problem quickly and affordably.

If you reside in or around Alton, Barrington, 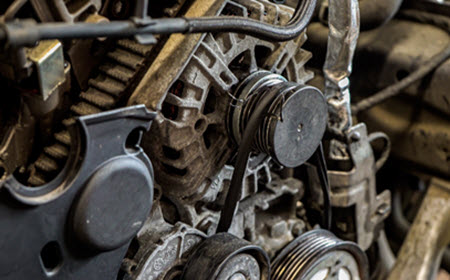 Berwick, Dover, Rochester, NH and are experiencing any of the above-mentioned symptoms, don’t hesitate to get your BMW serviced. Allowing any problem to linger might result in further harm. Dealing with the problem immediately will save you money in the long term.

For all of your BMW servicing and maintenance requirements, call Hagan’s Motor Pool now. Our highly trained experts consistently deliver dealership-quality servicing at an in inexpensive cost to you.